Finally, a game worthy of the price of admission; Rocky didn't even finish his chocolate digestive.

Otter looked to have a stronger squad than for the season's opener, nearly 3 months ago, when the visiting Avondale team ended up winning relatively comfortably. Once again Avondale were without their sharpshooter 007, but also, for a change, without the ever reliable Bind and Brooks. Strangely Moorhouse, the bedrock of their defence, also sat out the game, performing duties at the table. With two competent referees to keep order this had the hallmarks of a decent polo match, and Rocky and I had a small wager (I always keep the odd dog biscuit handy) as I fancied Otter to reverse their previous defeat.

Had this been greyhound racing, a trainer would have been sent to trap 1 early in the event to rouse the dog in white, who had clearly dozed off. Otter started by far the stronger side and at 0 - 4 half way through the first chukka, my antenna that had sensed a decent game appeared to be picking up the wrong channel. Otter were all half a yard quicker than their opponents and again and again managed steal the inside advantage and tap the ball into the vacant net. Avondale rallied slightly at the end of the quarter to pull a couple back, but still ended up 2 - 5 down at the change.

I need not have worried. Captain Fantastic managed to conjure the will to win from the lacklustre home team and the motivation that was sadly lacking from the start, reappeared in the second quarter. Goals from the strangely subdued 'sniper' Jacobs and two trademark backhands from Konrad from fast passes directly from the Avondale keeper quickly levelled the scores. The first of the backhands literally punctured the ball as it hit the far top corner of the net at barely sub-sonic speed and a replacement had to be found. Avondale managed a fourth in the quarter from the big ginger bloke who's bike I stole to ride home on (always worth popping a decent pair of bolt croppers in ones laptop bag) plus two good saves, one on each post from their evergreen keeper and finally in the last second an outrageous miss into a completely open goal from Otter closed the quarter at 6 - 5. Otter must have been kicking themselves. They had definitely played better polo as a team but the individual brilliance of the Avondale players and finally a defence that began to pay attention, with the long arms of Standley catching more than his share of ball, and we had a game worth watching.

From this point on there was never more than a goal in it, and a good sized pool of saliva collected at Rocky's feet as he sat rapt throughout the second half. Avondale looked the less fit, but their lack of aerobic prowess was more than compensated for by the skill of their attacking players and a persistent defence from one and all. Frank 'the tank' Ford, for whom an otter is generally only an appetiser, had earned a penalty in the second quarter and both he and Konrad earned one apiece in the third, somehow keeping Avondale ahead 9 - 8. "The Sniper" spent much of the third quarter on the bench looking decidedly unwell.

Otter levelled early in the fainal quarter and then edged ahead, only to see Avondale pull it back level after some persistent chasing from their captain and pressure on the Otter keeper forced him to submerge the ball and present Avondale with yet another penalty. A well worked extra man from Otter finally put them in front with only a minute to go and the game looked over. But, once again Avondale managed to work the ball to their right where the magician Konrad somehow completely fooled his defender who from where I was sitting just suddenly seemed to decide to take up a position behind the Hugarian rather then in front of him. Another penalty with 20 seconds on the clock and "The Tank" stepped up to the plate with the scores at 10 - 11. Perhaps he'd overdone the feeding and had grazed on one otter too many, who knows. The shot bounced up and rattled back off the crossbar to relieved cheers from the visitors, who ran down the clock to take a well earned victory.

What a pleasant way to spend a Monday evening.
Posted by Avondale Polo News at 23:48 No comments:

We have sketchy reports regarding the polo in SE London on 8th July, but Elliot Cross enjoyed a very pleasant family evening on the occasion of his 13th birthday and Guardian had this to say about Gnarles Barclay at the Astoria:

Green and Burton, a bespectacled, keyboard-playing boffin in a blazer, produce a set that has a foot in both the funk and psychedelia camps, and melancholy at its core. No matter how ebullient Cee-Lo's banter, when he sings, it comes from down deep. He pulls out all the stops on Neighbors, a soul ballad so weighty he sits down to deliver it, and it's not hammy but intensely poignant. Poignant is also the word for Just a Thought, a number that sounds huge and symphonic, but masks an aching heart.

"We've heard this a million times," Cee-Lo apologises at the start of Crazy, but familiarity hasn't dimmed its brilliance. By the end, Green is beaming like a searchlight, basking in the crowd's love for him and his singular band.
Posted by Avondale Polo News at 19:11 No comments:

A Report from the Real Avondale Captain:

An evening faced without the big guns. Last minute emergencies forced numbers down to 9 players for a team that often has a squad of 13 playing. Unfamiliar territory where fitness was to play a part. On a day of sunshine and showers the waterpolo showed similar characteristics. Some room for praise – 10 goals scored is pretty good, but to be taken apart by one player and not do anything about it… a shame. We were 8-8 at half time and maybe that fitness aspect showed, but it was a tail of spectacular play from their number 9, and fabulous hat tricks from Andy Parkin and Focco Van der Vegt – the latter showing a continuing show of impressive form from the new “working” man. Clearly his abandonment of his children during the day was allowing him fresh bursts of energy. I’m sure his wife will be so pleased.

The great thing about this game was the attitude of our opponents. Sure we lost but all agreed during the rehydration session that they were a lovely bunch of lads. As Andy put it “he elbowed me so I told him I’d f*cking kill him if he did it again. So he said ‘ok I won’t’. Right… ok then…” they were a good natured bunch and we went home knowing how we’d have done things differently but equally we knew we hadn’t been duped!

Posted by Avondale Polo News at 09:02 No comments: 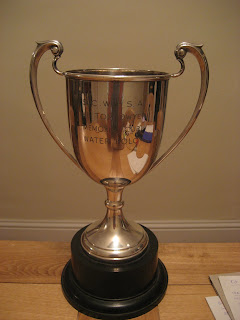 Posted by Avondale Polo News at 07:02 No comments:

One sided games are getting to be a speciality of mine of late, but this one was forecast in advance by it's very nature. The Tom Dwyer Cup is a handicap tournament and history has a clear view on the matter of the type of winner. The congnoscenti will tell you that it's usually the Surrey League's strongest team, but occasionally a well handicap underdog turns over the favourite. Tonight's final had cliché engraved on it. Avondale were by some way the strongest team in the league last season and Blue Marlin, the current holders, have prevailed against strong opposition many times in this event. Rocky and I even had what would be considered a crowed for company in the stands this evening.

I've seen games like this before and from the a impartial spectator's perspective it's rarely a thing of beauty. Blue Marlin started with a 20 goal handicap in their favour and I've see them strangle opposition with a much smaller advantage than this as their opponents press just that little too hard. When the goals fail to come quickly it doesn't take long for the advantage to become overwhelming.

So, as our two referees lined up the teams there was the tangible air of anticipation about the encounter. My money was on the much stronger Avondale team, who had close to a full squad, but were missing Standley, Jotic and Bind, enough talent to make the boat wobble if not tip! At the visitor's end Blue Marlin seemed to have brought most of Walton On Thames. I had the distinct impression that there had been a three line whip applied and the bench was groaning!

The first quarter is often crucial in these games and so it proved tonight. I have rarely seen a more comprehensive blitz than that delivered by Avondale in the first seven minutes. Blue Marlin did have three shots in the quarter, all saved, one moderately well, by the aged Avondale keeper, but at the other end it was carnage! How may times have I see this Avondale team completely dominate the first quarter and yet come away with perhaps a two or three goal advantage. Tonight they were unstoppable. Bond was lethal, Jacobs deadly, Konrad delivered a trademark backhand from the half way that rebounded off the back of the goal onto the keepers head before he could twitch.... It was all a bit of a blur! The impressive thing was that Avondale not only shot accurately and decisively, but they delivered the ball intelligently for the final pass and several goals were into a vacant net as the keeper was stranded. The quarter finished 13 - 0 and the game was as good as over.

As might be expected Avondale's dominance slipped in the second quarter, which they won only 4 - 1, as everyone tried to get in on the goalfest, but it was really only a lull and the third was won 8 - 1, including a couple of impressive stands by the Orca like Ford, imperious in the pit. So we started the final quarter with a net score of 25 - 22. Both Rocky and I had rather lost interest by now as the home team cruised onto the podium, but as I left the pool I reflected on the fact that it might have seemed easy in the end, but only because Avondale had played so well for the first quarter. An object lesson in how to render a potentially slippery banana skin unslippery.

I leave you with something I overheard whilst leaving the pool, as two of the staff were talking and one mentioned that his father had died recently. Apparently a few weeks earlier his mother had covered his father's back in lard.... and he'd gone downhill very fast after that.
Posted by Avondale Polo News at 00:10 No comments: