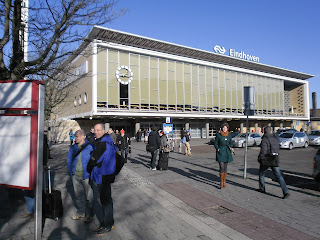 Great weekend for the Avondale delegation at the European Championships of Waterpolo in Eindhoven.

12 matches and a lots to learn for 2 Dutch, an Italian, a kiwi and an Englishman that represented the club.
Game of the weekend has to be the semi final between Hungary and Montenegro ,a game so fast and furious that can only be compared to a Tom Dwyer cup match in Walton with a 23 goal deficit.
The rest of the weekend was spent embracing a few new things of the local culture: Italians and New Zealanders seem to be considered to be too short for Dutch standards , Focco’s desire to have a Chinese on Saturday night meant he was trying to convince us all that Indonesian food is also served in Chinese restaurants, the longest street with bars and clubs in the whole of Holland and maybe in the whole wide Universe was right there in Eindhoven(merely a 5 minute walk to the end between drunken teenagers),the central station is meant to look like a radio but after three days and a long debate it could only be described as something more similar to a television.

All in all a good weekend, good beer, good food ,good polo.
See you all in Budapest in 2014
Posted by Avondale Polo News at 16:33