Another successful trip to the continent. What a fine bunch of athletes: 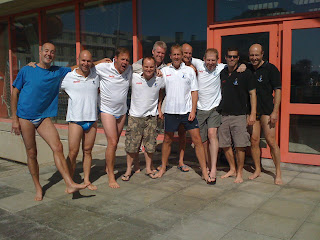 Our typically relaxed game start proved our undoing when we contrived to lose each of the first three games by a single goal. Trailing by four goals at the mid point of every game left us too much to do in the second half. Perhaps one Cimay beer too many on the Friday night?

An unusual salt water pool with added super-corrosive chemicals proved too much for Pink Parkin who blinked his way through 9 contact lenses on the Saturday. On day two he could barely distinguish light from dark and was relegated to goal where his inability to see the ball was mitigated by his considerable bulk. The boys rallied and won their final two 'play off' games on Sunday in convincing style.

Of particular note was the quality of the BBQ restaurant, the scene of Saturday evening's post game engorgement. Not only was the food of excellent quality, our waitress' sunny disposition and elegant profile secured enough votes for her to win coveted Golden Ball award for service to the team, as Binder's smile confirms: 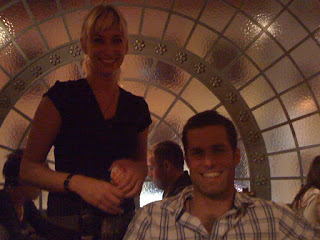 Jo impressed everyone with his moves on the dance floor (except the boyfriend of the girl he was dancing with). 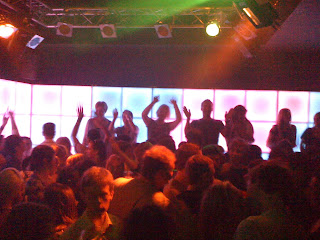 The award for the ***ker of Oostende was awarded to the proprietor of the KouKou (or something equally daft!) restaurant. His simple sales prevention techniques were insufficient to deter the hungry chaps on Sunday afternoon.
"Can we see a menu?"
"We serve Chicken and Bread."
"Only chicken and bread"
"Yes, how many chickens do you want"
"...."
more award winning dialogue
"...."

Scene ends twenty minutes later with the boys departing and leaving a pile of brass coins on the table comprising exactly the 20.20 Euro bill - you don't mess with Avondale! (Actually the chicken was very tasty, although you don't get cutlery and the five of us shared the two hand wipes he was generous enough to give us - one per half chicken I guess.)

And finally : ask Dave to tell you the one about the Dutchman who translated an english menu into english. "Stop, stop your killing me!"
Posted by Avondale Polo News at 14:32