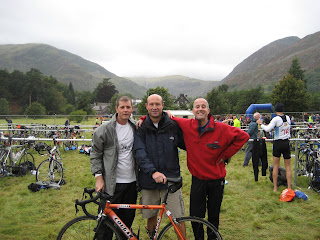 Avondale Water Polo club made it's first serious foray into the now very popular world or Triathlons. Maarten (44th) and Jonnie (11th) took part in the Mens Fitness Roughtrack Triathlon at Dorney Lake near Windsor and Peter (62nd), Dave (229th) and Matt (219th) ventured rather further afield to compete in the Helvellyn Trithlon in the Lake District.

Suffice to say that Avondale finished as the top Water Polo Club in the Helvelly Triathlon (top 3 finishers count)! Now don't they look like they were enjoying themselves!

Posted by Avondale Polo News at 19:47